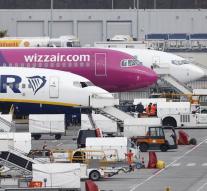 This is evidenced by research in six EU countries that was presented in Brussels on Thursday. Monique Goyens of the European Consumer Code BEUC: 'The figures are worrying. Airlines regularly ignore EU rules and the authorities do not do anything about it. Consumers are entitled to protection, and not just the complainants. '

EU law covers all flights departing within and leaving the EU, and EU-based flights from an EU. Delayed or canceled flights are not necessarily compensated. For example, there may be special circumstances. The survey was conducted in Belgium, Denmark, France, Italy, Portugal and Spain.