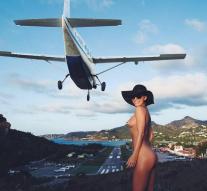 brussels - The fact that it was a bit dared to wander virtually naked around Egyptian pyramids, Marisa Papen knew, but the cell she encountered when she was arrested brought an abrupt end to her adventure in Egypt.

The Flemish Papen had to appear before the court after her arrest. In between, she was caught in a cell. 'The first cell was full of bombs. There were at least twenty people. Some lay unconsciously on the floor, others blurt their hands through the bars and others were bleeding and shouting, 'she writes on her website.

Papen had attracted the bad shoes together with fellow traveler Jesse. She wanted to walk in a skin tan pant through the Egyptian temples. For Papen, 'nude' is not even special because she is nude as a hobby. But the mystical pyramids? That was new. 'Jesse was fascinated by ancient Egypt. He told me he wanted to create a photographic story, in which we would show how Egypt looked like the Nile dried up. '

Actually, she did not enter the pyramids, but when they shut up guards some money, they did. Once inside, her dress went off. 'We did not talk: I just walked through the corridors and Jesse followed me and took pictures. No idea how many minutes passed, but suddenly there were two men for me. What a cold shower. I was ready to wake up, 'said Papen.
Photo: Marisa Papen / Facebook

The men were angry. They had to call the police, they said. Again, the trick came to offer a $ 20 bill. The men agreed. Marisa Papen: 'We were allowed to go. Oef! '

The couple went unconcerned while traveling, on to Ethiopia, but the pyramids continued to pull. They decided after a week to return to Egypt. Even then, it went wrong: when Papen went out of the clothes they were caught again. This time there was no escape, and the couple was arrested.

Then the misery began, whose cell was the highlight. 'I knew that the prison here would be different from Belgium, but I had no idea what to expect,' says Papen. She saw the people screaming. Some blew. Others were unconscious, she claims. 'Jesse kept telling me I could not watch, but I could not do anything else. '

In court, Marisa and Jesse went off with a sisser. 'We played the role of stupid tourists who had no idea that it was forbidden to dance in skin underwear on Egyptian soil. The judge finally gave us a warning and told us that we should never again be ashamed of this. We nodded. '