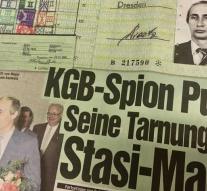 berlin - The current Russian president Vladimir Putin has spied in his youth for the East German Stasi. His former pass has been sunk by the newspaper BILD.

Putin lived in Dresden since 1985, where he would stay until just after the fall of the Wall. He worked for the KGB and interviewed dissidents in the communist GDR, which was occupied by the Soviet Union since the fall of the Nazis. Now it appears that Putin, at the time in his thirties, also worked for the Stasi.