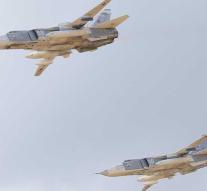 brussels - The crew of the Belgian naval ship de Godetia was shocked by two Russian SU-24 bombers that flew low on Thursday morning in the Baltic Sea. The Godetia is currently the command ship of the NATO fleet of mine fighters in the north. The bombers wore rockets under their wings

This is what the Flemish television channel VRT reports. By now arming their bombers, Moscow is putting pressure on NATO again. 'It was a clear signal from the Russians: Look what we can do, what we dare', says Belgian frigate captain Peter Ramboer.