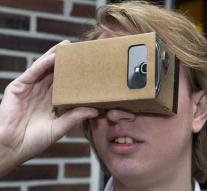 - YouTube has announced two new features for its Android app that improve the use of virtual reality in the video service. The app supports the new VR video format that adds depth in the 360- degree images. In addition, Google has made ​​all videos suitable for viewing with cardboard VR goggles Google Cardboard.

The new VR video format gives a more realistic picture than traditional 360-degree movies because different images are sent to the right and left eye. This causes a depth effect.

Need to shoot videos in the new VR format is a special camera lineup and images must then be converted into the format. Makers images can upload directly to YouTube, like movies in standard format.

Users who want to view the images must have a Google Cardboard or similar device. Other YouTube videos can now be viewed with a VR goggles. The virtual reality experience, or more limited. Google itself compares it to content that is shown in an IMAX movie screen.

The new features in YouTube are currently only available in the Android app. The improved iOS app will soon, as promised, the video service.