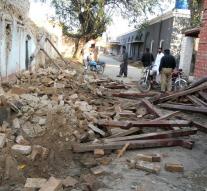 - The earthquake that struck Monday the rugged border area between Afghanistan and Pakistan was the strongest in 66 years. The death toll so far amounts to about 180. They were mainly on the Pakistani side of the border. The earthquake with a magnitude of 7.5 was felt from Kabul to Islamabad and New Delhi.

The epicenter of the quake was 213 kilometers deep in the remote and sparsely populated mountain Hindukush region, which explains the relatively low number of casualties. The information from the area is only sparsely outside. For this reason, the number of deaths and injuries may rise in the coming days.

One of the worst scenes took place in a school in the Afghan province of Takhar, where twelve schoolgirls died in the panicky compromised immediately after the earth shook beneath the school building. In an effort to come out, many children were trampled by fellow students. The material damage in Takhar is particularly significant, as told to the regional disaster office. The other of the more than thirty deaths in Afghanistan were spread over a large area.

In Pakistan were counted at nightfall 147 deaths, mostly in northern and northwestern regions. The hardest hit is the Chitral region, where dozens of people died. Again, the authorities fear more deaths due to the remote and inaccessible areas affected by the shaking earth.

The faltering communications for the rescuers still the biggest problem. In Pakistan, the huge material damage. Alone in the Badakhshan province, hundreds of houses were destroyed. Both in Afghanistan and in Pakistan, the authorities reported many wounded, probably a thousand people.

The Hindu Kush mountain region is seismically very active. The earthquakes are caused by subterranean shifts in the Indian subcontinent and the Eurasian land mass. The South Asian region is known for the strength of the quakes. In Nepal fell in April, more than 8,000 deaths from an earthquake.