Home / World / With or without borders closed Merkel 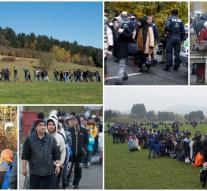 - A German Christian Democrat politician, Hans-Peter Uhl, has uttered threatening words in the Sunday edition of the Frankfurter Allgemeine opposite Chancellor Angela Merkel of the CDU (Christian Democratic Union). Uhl, a Christian Democrat from the South and Member of Parliament on behalf of the Bavarian CSU (Christian Social Union) said that " the borders with Merkel shut or closed without Merkel (for refugees)." Merkel is considered far too welcoming to migrants.

The threat coincides with summit on the refugee crisis in Berlin, which failed Sunday. The leaders of the governing coalition of Christian Democrats and Social Democrats were planning in this crisis and put their noses one side top, but Merkel, CSU chief Horst Seehofer and the Social Democratic leader Sigmar Gabriel (SPD) achieved Sunday nothing apparently. Thursday they try again.

Since Merkel herself earlier this year let slip that Germany Syrian refugees divorces, her country is among the most popular destinations for refugees and other migrants, not only from Syria. According to Uhl should the country put a stop to the influx and wants the majority of the population. " Merkel can not go against the majority, without losing her job as chancellor ", said Uhl.

The Bavarian CSU is against the refugee policies of Merkel. Most migrants come first in Bavaria in the country. Neighboring Austria refers to German policy. invitation politics And Austrian Foreign Minister, Sebastian Kurz, demands that this policy goes overboard.