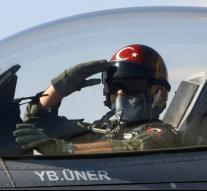 The Russian aircraft are now three times around actions against targets in Syria flown in the airspace of Turkey, not only to the annoyance of Ankara, but also suspicious of the West and NATO.

Tuesday, the Russian ambassador in Ankara for the second time in three days, summoned to come to talk about the incidents .