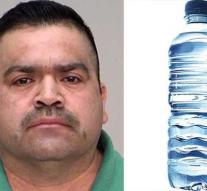 minneapolis - A 47-year-old man from Minneapolis is accused of having peed several times in the water bottle of a female colleague. The man would have done that after his advances were turned away.

Conrrado Cruz Prezez from October 2017 regularly filled the water bottle of his colleague with its own liquid. According to the indictment, the employee of the Perkins Family Restaurant would have noticed for several months that the water in her water bottle tasted like urine.

According to the woman, the water began to taste strange after she told her colleague that she only wanted to be friends, CBS Minnesota said. Since then she would have drunk some 15 times water with a special taste.

Perez denied at first that he had peed in the bottle. When researchers said there was also the possibility to test for DNA, he admitted to have done so anyway.

In his own words the man would only have been peeing in the water bottle at times because he had to go to the toilet and it was busy in the restaurant. However, Perez would have forgotten to throw the bottle away. Three weeks before the 'let's be friends' conversation, the man would have peed in the bottle.