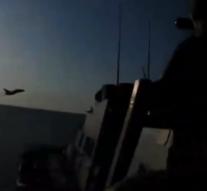 moscow - The crew of the Russian fighter jets skimming Wednesday brushed past an American warship, have complied with all safety regulations. Which has declared the Russian defense minister Wednesday, according to the Russian news agency Interfax.

Two Russian warplanes simulated Wednesday in international waters off the coast of Russia an attack on an American warship. The Jets, who had no weapons had with them to see far, flew right past the destroyer and did fly up the water.

After the maneuvers of the two Sukhoi jet fighters followed a Russian combat helicopter, which flew circles around the ship and took photos.