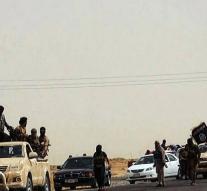 - The hacker group Anonymous claims to have proof the Islamic State plans Sunday to commit attacks worldwide. The terrorist movement would be planning to commit attacks in France, Lebanon, Italy, Indonesia and the United States. International media reports said Saturday.

In an interview with International Business Times says the hacker group the authorities have been informed.

The group wants the sites to which they say they have seen no evidence public. " We express no links shared because that would then be deleted immediately and no evidence would believe ", enables Anonymous, who promised after the attacks in Paris to intensify the attack on IS.

France would become a demonstration for women's rights and canceled two concerts have been identified as targets. In the United States would be a major wrestling match in Atlanta are threatened and in Rome the Catholic celebration of Christ the King. A performance by Five Finger Death Punch in Milan would also be on the list of targets. That band performed last week at the Heineken Music Hall.

A Catholic celebration in Lebanon and a Muslim gathering in Indonesia also threatened to be attacked, says Anonymous.