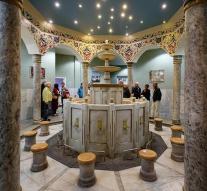 - More than 40 percent of Germans are convinced that the country is undermined by Islam. According to a survey conducted by the Friedrich-Ebwert Foundation.

The proposition 'In Germany one can not say aloud what one thinks without arousing annoyance', is endorsed by 28 percent. The same percentage agrees with the statement that the governing parties deceive the people.

The refugee debate, according to research is clear that there is a split in society between 'a majority that wants a global attitude, tolerance and equality, and a not very small and vocal minority that requires shielding, national rethinking and inequality. '