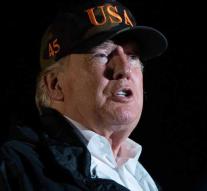 san francisco - A federal judge in San Francisco has determined that the government of President Donald Trump is not allowed to exclude immigrants illegally entering the United States from the south. It is a temporary decision of the judge. Presumably he decides in December for the longer term.

At the initiative of two civil rights organizations, the judge had examined a decree issued by Trump on 9 November. That decree would be valid for ninety days and was intended to discourage illegal immigration. Migrants who wanted to enter Mexico from Mexico were only allowed to apply for asylum at official border posts.