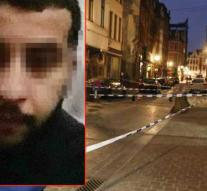 brussels - The man who injured an agent on Tuesday morning at the Brussels coal market in a mes attack, was on trial leave. He was stuck for attempted manslaughter. He was allowed to test while the Belgian Public Prosecution Service issued a negative recommendation.

That reports Het Nieuwsblad. The perpetrator, who is referred to as I. T., would later be shot down by an agent and is currently in danger of death. The Brussels prosecutor's office opened a judicial investigation for 'attempted murder in a terrorist context'.