Home / World / Black Box Russian device does not yield much 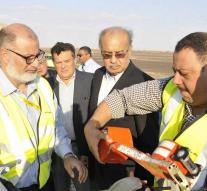 moscow - Examination of the black box flight from Egypt crashed Russian passenger plane has yielded no specific information or clues about the cause. Until the crash in the Sinai were working all the systems of the Airbus A321 properly, so let the experts know on Friday the Russian newspaper Kommersant.

Approximately twenty minutes after the start stops the recording of the flight data recorder in the suddenly. Possibly all connections have been broken by the crash had the black box with sensors.

All hopes are now focused on the recorder that recorded the conversations in the cockpit. However, it has been damaged by the crash so that the eavesdropping is going to last longer.