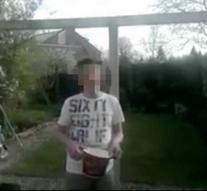 lochem - The five guys who pick up the police on suspicion of major DDoS attack on Ziggo last summer, will again free. Reason: four of them are minor and may wait at home the rest of the study.

One of them is the only 14 -year-old Diederik de Z. Lochem. "An aggressive guy", acquaintances know him. "He hits it sometimes on the loose and has a big mouth . Not the kind of computer nerd that you would expect". Diederik is in school, but in the meantime keep a small camera through his house into the holes.

With journalists he will categorically not talk . "Fuck off", he shouts over the internet Skype.Op he is known as 'FoxelVox' and through this pseudonym he terrorizes the worldwide web. On YouTube, he claims responsibility for the attack on Ziggo because of 'poor service' provider and he boasts of the group to be the leader Anon_Nazi. Other members come from Vinkeveen, Alphen aan den Rijn, Daman and Schoorl. At the suspects home computers, cell phones, hard drives and USB sticks seized.