Home / World / Who is behind the attacks in Paris ? 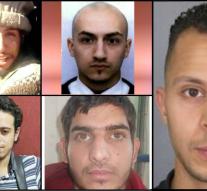 - What is now known about those behind the terrorist attacks in Paris, which has killed 130 people's lives ?

The most wanted man in Europe is currently Salah Abdeslam, the only offender who escaped. He is the younger brother of fellow perpetrator Brahim Abdeslam and probably was a driver of the terrorists. A car containing Salah and two other men, a day after the attacks stopped by the police, but was allowed to drive after checking again. It is suspected that Abdeslam is still in Belgium, possibly even in Brussels.

Mastermind behind the attacks was probably the Belgian jihadist Abdel Hamid Abaaoud, which is also blamed for previous attacks in Europe, including the failed attack on the TGV between Paris and Amsterdam on 21 August. He would have directed the bombers from Syria. Abaaoud was the leader of a terrorist cell in Verviers that was rolled up in January. He was sentenced in absentia to twenty years in prison. He came from the Brussels district of Molenbeek. Abaaoud Wednesday was slain in an anti-terrorist action in the Paris suburb of Saint-Denis

One of the men who blow themselves up outside the Stade de France was Muhammad Ahmad al. A Syrian passport with that name and birthplace Idlib was found on his remains. His fingerprints were recorded in Greece in October after he arrived there as a refugee.

The Belgian Bilal Hadfi dropped his bomb belt detonate at the stadium. He came from Neder-over- Heembeek and was until last year mainly on football, but then quickly radicalized. Last spring he went to Syria. In July he placed a call on Facebook to carry out attacks in the West. " The brothers who reside in the lands of the infidels. Those dogs attacking our citizens everywhere. Turn into their community of pigs so that they feel even in their dreams no longer safe. "

Brahim Abdeslam is the older brother of the remaining fugitive Salah. He blew himself up on a terrace of Comptoir restaurant on the Boulevard Voltaire Voltaire. He also lived in Brussels.

Omar Ishmael Mostefai was one of the gunmen in the Bataclantheater. He is of Algerian origin and lived near Chartres, where he joined a group of Salafists. He was arrested eight times for minor offenses and was in view for its radicalization, but he was never involved in a major study. In 2013 he traveled to Turkey, where he supposedly went to Syria. He blew himself up after the shooting in the theater.

Even suicide bomber Samy Amour is held responsible for the 89 murders in the theater. He was two years ago, have traveled to Syria after he was radicalized in France. He has previously been charged with terrorism because he had been planning to travel to Yemen. He came under the supervision of the judiciary, but disappeared and was sought internationally since 2013.

Ahmed Dahman is considered the "location scout " of the attacks in Paris. He would have picked the places where the perpetrators of massacres inflicted. Dahman was arrested Saturday in the Turkish resort of Antalya. He sat there since November 16 in a five-star hotel.