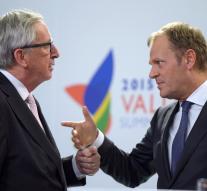 After the two-day G20 summit near Antalya by plane Monday they would fly back to Brussels, but the power of the Belgian Air Force (BAF) remained on the ground for a yet unknown security problem. Juncker and Tusk can now only at the earliest on Tuesday to leave.

During the G20 summit talked nineteen largest economies and the European Union inter alia the refugee crisis, the conflict in Syria and the attacks in Paris.