Home / World / Shenzen disaster was due to human error 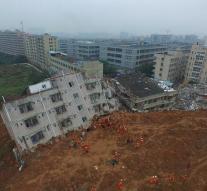 shenzen - The Chinese government has confirmed that human error is the cause of the devastating landslide in Shenzen. That was already clear, but a statement from the authorities confirmed again.

Sunday started a big mountain to slide sand after rain. Certainly 33 buildings were buried, four people were killed and dozens of people are still missing. According to authorities, there are violated rules by the people who had built the great mountain construction waste at the industrial complex. Those who are responsible will be held accountable , it sounded threatening.