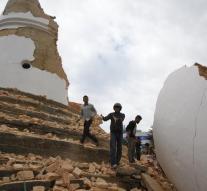 zurich - In disasters and major accidents this year worldwide, about 26,000 people were killed. Compared to 2014 is a doubling, the Swiss reinsurer Swiss Re reported Friday.


Just the earthquake in Nepal, in April the Himalayan state struck with a magnitude of 7.8, took 9000 lives. Half a million homes were destroyed.
In addition, more than 5,000 people died in India, Pakistan, North Africa, Europe and the Middle East due to the extreme heat in the summer. In May and June the temperature peaked in India and Pakistan to above 48 degrees Celsius. That was the highest temperature there since 1995.
An estimated several thousand people also lost their lives in the dangerous crossings across the Mediterranean from the conflict regions of North Africa and the Middle East to Europe.
NEW