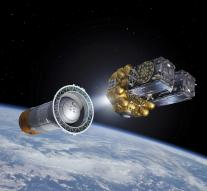 kourou - Europe is a step closer to its own navigation network. Two new satellites for the Galileo project on Thursday launched from French Guiana. Galileo will be the European rival to the US GPS.

Galileo will eventually consist of a network of thirty satellites, to be listed on more than 22 000 km from Earth. On Thursday, eleven and twelve satellites were launched.

Each satellite carries the name of a child from a European country. The probes of Thursday called Andriana (for a child from Cyprus) and Liene (Latvia). In the course of the next year is going 'Dutch' satellite Tijmen the air. Which is named after a Gelderlander boy who won a drawing contest.

Galileo should be an alternative to the GPS network of the US Army, which is used everywhere. Galileo will soon not only helps cars and ships to get from A to B. Rescue use the precise data for search, and armies to attack. In the distant future even aircraft must safely on autopilot can land thanks to Galileo.

However project has been widely criticized. It takes more than 4 billion euros to build all the satellites and put in orbit around the Earth. After that, the operation will cost about 800 million euros per year. Opponents say it is a waste of taxpayers' money.

Netherlands, among other things made the solar panels of the satellites.