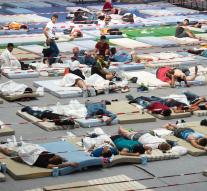 - The number of incidents in shelters for refugees in Germany so far this year, more than four times as large as in 2014. That the German Federal Criminal Police Office (BKA) announced Wednesday.

Until December 7 817 incidents were recorded. Last year there were about the year 199. According to the BKA his far-right offenders for sure 733 attacks accountable.

These include for demolitions, incitement and propaganda offenses. But the number of more serious offenses increased. The BKA had 130 violent crimes, including 68 arson. Throughout 2014 these were 28 acts of violence.