Home / World / License plates of Kennedy under the hammer 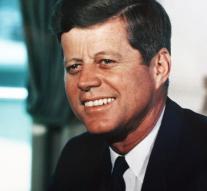 dallas - The license plates of the limousine in which President John F. Kennedy was assassinated in Dallas on November 22, 1963, will be auctioned soon. Heritage Auctions in Dallas expects signs converted will yield more than 70,000 euros.

After the attack by Lee Harvey Oswald, the car was taken to a garage, where the license plates imprinted DC (District of Columbia) were dismantled by the authorities and were thrown on the scrap heap. The owner of the garage was allowed to keep them as souvenirs. The man's family, she has now taken to the auction house.

Heritage Auctions will auction more of Kennedy. Among other diplomats passport from 1951, which should yield at least 18 000 euro. The pass of his wife Jacqueline begins at 13 000 euros. A wallet with driver's license, the President comes under the hammer.