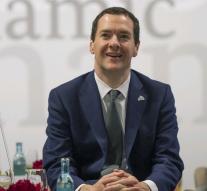 london - Islamic State 're deadly cyber attacks on targets in Britain. That the British Chancellor of the Exchequer, George Osborne, said Tuesday during the announcement that he will double the annual budget for the fight against cybercrime. In 2020 there will be an annual 1.9 billion pounds (2.7 billion euros) go to combat such crime.

According to Osborne may cyber attacks cost lives if terrorists manage to sabotage the national electricity supply as they take over air traffic control computer systems or hacking hospital computers.