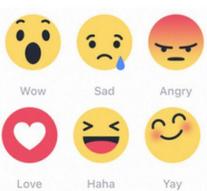 - Finally, it is clear how the 'dislike' button on Facebook will look like and how it works in practice. Using the button, users can respond to messages through one of six emoji.

There has long been speculation about a button next to the "Like button with which it should be possible to also quick to give a reaction less fun messages, for example if someone is deceased or if a relationship has ended. In those cases, a 'Like' is not really appropriate. Instead of one button , Facebook is rolling now in two test markets, the ability to react with an emoji, the famous pictogrammetjes emotions that are added to messages. In addition to 'Like' users will soon also have the ability to 'love', 'haha', 'yay', 'wow', 'sad ' and 'angry' check box.

This Facebook seems to hit several birds with one stone and expressing a wider range of emotions to offer than was previously possible. The emoji will soon be rolled out in Ireland and Spain, then Facebook will analyze its usage and see if there are changes to be made.