Home / World / Again direct mail between the US and Cuba 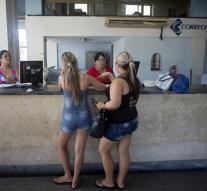 - After more than fifty years, it is again possible to directly send letters and packages between America and Cuba. Negotiators from Washington and Havana on Thursday agreed to resume direct postal traffic. That said a spokesman for the US State Department Friday.

Both countries want to post several flights per week. Hitherto, the postal traffic between America and Cuba through other countries.

The agreement is part of the agreement between the two countries to normalize their relations. The US and Cuba lived for 54 years at war.