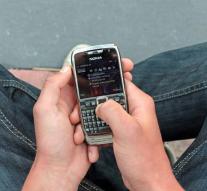 - Authority for Consumers & ; Market (ACM) has drawn the short straw in a case against SD & amp; P Interactive Breda for violating the ban on spam. The company does not pay a fine of 60,000 euros to pay, the court ruled in Rotterdam.

According to ACM had S & amp; P guilty of violating the ban on spam by sending unsolicited text messages to consumers who had left their data on a commercial website to thus win a free product. The former regulator OPTA, the forerunner of ACM, the company had in 2010 imposed fines totaling 550 000 euro. Of them came last year too shabby 400. 000 after the Board of Trade and Industry (Tribunal) last June in favor of SD & amp; P had decided. The remaining fine of 150. 000 was then reduced by ACM to 60. 000. That fine is now the job because the Rotterdam court ACM finds that in the cases that remained sufficiently demonstrated that there was ' unsolicited communications '.
NEW