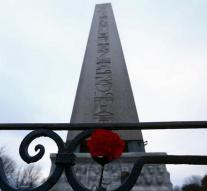 - The Turkish authorities in connection with the attack Tuesday in Istanbul arrested three Russians. The trio could have links with Islamic State.


This was reported by the Turkish news agency Dogan. The Russians were arrested in the famous resort of Antalya. The Russian consulate has confirmed the arrest.
The suicide attack in the center of Istanbul came Tuesday ten people were killed, including eight German tourists. Fifteen others were injured. The perpetrator would be a 28-year-old Syrian member of IS.
NEW