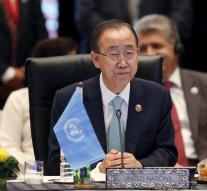 ankara - Turkey, the Secretary- General of the United Nations, Ban Ki-moon, and the five permanent members of the UN Security Council was informed of the shooting down of a Russian fighter. Which have Turkish diplomatic sources said Tuesday.

A Turkish Minister met with the envoys of Russia, the United States and Britain and with the French ambassador.

Turkish F- 16s fired Tuesday morning a Russian fighter plane, according to Turkey because they had violated Turkish airspace repeatedly.