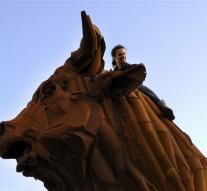 - Firefighters were Monday at the England Rugby, near Birmingham, and go out for an unusual and most risky job. A bull had been established with its head to sit in a cavity of a tree. It took rescuers more than an hour to free the animal from his predicament, writes The Telegraph.

There were a winch and straps to be called in to tear the bull from the tree. For safety reasons, the firefighters used a safety shield

Earlier this year there was a similar incident in the county of Derbyshire. When a cow was caught between two logs. Another problem was that some ferocious bulls kept watch over their female counterpart. They were kept at a distance by a fire engine.