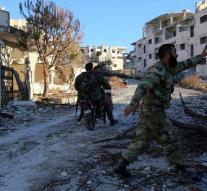 damascus - The Syrian government army on Sunday a rebel stronghold in the mountains northeast of the port city of Latakia recaptured.

The Syrian state broadcaster and observers of the Syrian Observatory for Human Rights (SOHR) reported that the town of Rabiya, about 40 kilometers from Latakia removed using heavy bombardment by the Russian Air Force in the hands of the army has been dropped.

The pro-government forces and militia are now as close to the Turkish border. The battle in the province of Latakia is particularly severe because the government of President Bashar al-Assad, backed by Russia's allies, the region wants to free rebels. The coastal region in northwestern Syria is traditionally the domain of the minority Alawite. As the Assad family belongs.