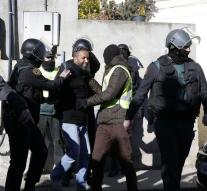 rome - Seventeen people have been arrested in several European countries during an anti-terror operation. According to the Italian police arrested suspected of "international terrorism".

The action was directed against a movement of Kurdish- Sunni origin, Rawti Shax or Didi new. This is a group that comes from Ansar al- Islam, which is linked to al- Qaeda. The arrests were in Italy, Britain, Norway, Finland, Germany and Switzerland. The group would have recruited from other jihadists to fight in Syria and Iraq.

The police action was led by Justice in Rome. A spokesman declined to disclose how many arrests have been made in Italy, but he said there were no Italians are among the suspects.