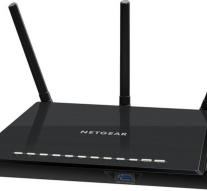 - It's a lot of people a thorn in the routers of ISPs are often inadequate, especially in terms wifi. One solution is to connect this dual band Wi-Fi router, such as the Smart Netgear R6400 WiFi Router, causing the 5 GHz frequency is within reach.

Netgear R6400 has tried to give an attractive appearance with a glossy black look, but really nice a router is not fast. That really does not really matter, because it is mainly about the functionality. Furthermore, the router will hang in the cupboard or stand out of sight. The device senses with dimensions of 19.1 x 19.85 x 6.5 cm best in what place, but sit in the back two notches so you can hang it on the wall. Furthermore there are three antennas.
The router contains two USB connectors. Netgear recommends the 3. 0 port to use on the front for external hard drives and 2. 0 leg to connect a printer. Also there is a WPS button for quick coupling with other network devices. Further in the pack an adapter, network cable, CD-ROM and the necessary manuals in different languages. Unfortunately, not in Dutch.

Fortunately, the pictures speak for themselves in the manual. After connecting the cables that automatically opens the Netgear Genie website where you can then set the two networks of 2.4 GHz and 5 GHz. It is useful to keep the name and password of the previous wireless network, so you do not have to replace it anywhere on your devices.
However, I had myself have to find out exactly how I had to close the R6400 to the KPN router, without my telephone and television would lose. The bottom line is that the telephone and television remain connected to the 'old' router and further the Internet is routed to the new device. The Wi-Fi connection must be turned on KPN router because that job is also taken over by the R6400. It is possible to even more rigorous proceed in disabling the functions of the old modem, but because you can not be helped by the helpdesk of KPN, I have not chosen to do so.

As mentioned, the R6400 supports the standard 2.4 GHz and 5 GHz. The latter is a godsend for people who live in densely populated areas, so there is a lot of noise on the 2.4 GHz frequency. This allows for a slow wifi and frustrated people. The 5 GHz signal is less used with faster Internet as a result. To use this you have to have about devices that support 802. 11ac and 5GHz.
During testing, I have had no problems with heavy Internet activities. Both wired and wireless connections remained stable. At the same time downloading a game, and stream a movie went smoothly. Even when more than 10 devices were connected as the Genie app.

The Genie website consists of two tabs: Basic and Advanced. For simple adjustment of your network name and password, and set parental controls, guest network and automatic backups, you can find fine with Basic. However, if you lower the plunge router to adapt to the network all the way to your liking, you can unsubscribe through Advanced. Many of the basic features are also found in the app.
Using the parental controls to protect users better. For this, several levels are possible. Layer protects against phishing and pornography. High blocks include sites that are not suitable for minors and access to social networks You must advance to create an OpenDNS account with Netgear so that the settings can not be easily modified. However, this is a piece of cake.
Netgear also offers the service ReadySHARE. That includes the ReadySHARE Vault and Ready Cloud. People with a Windows PC can set automatic backups via the free ReadyShare Vault software on a hard drive attached to the router. Mac owners can use this just Time Machine. Ready Cloud gives you remotely via a dedicated website to access the attached hard drive so you can anywhere in your files. You can upload via the Genie app including pictures and videos from your smartphone or tablet to that drive.

The Netgear R6400 is a good quality router and provides stable Internet connections. It's definitely a relief when you depended until now on the router of your inter-operator. Furthermore, it is nice that you go through the website and app easy way to add functionality such as parental control, setting up a network for guests and scheduling automatic backups.
NEW