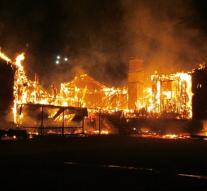 stockholm - A refugee center in the south of Sweden has gone up in flames. Police said Saturday that the fire in the building probably ignited.

It is a former school building in the village Ljungby last week was designated as a shelter place for asylum seekers.

There were eighty displaced persons are housed in . Sweden has a high proportion of refugees , like Germany where already several shelters at the hands of arsonists burnt down .