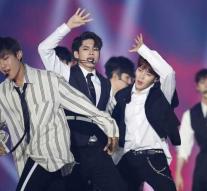 hong kong - Fans of a Korean pop group became so hysterical when they suddenly came face to face with their heroes aboard their plane, that the plane had to be evacuated.

The three were on a Korean Air flight from Hong Kong to Seoul when band members of the immensely popular Wanna One boarded. According to the newspaper Hangkook Ilbo, the fans flew straight out of their seats, despite the express order of the crew not to do so.