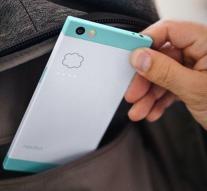 - Smartphone owners can not get enough of downloading apps and thereby constantly to possess little phone's memory, may benefit from Robin. This smartphone of the American Nextbit stores files and applications that are rarely used automatically in the cloud.

The Nextbit Robin was introduced last month as Kickstarter project and was able to collect $ 1.36 million. Meanwhile, the unit can also be ordered via the Nextbit website. The current retail price is set at $ 399 or $ 50 to $ 100 higher than through the investment platform. The aircraft will be delivered from February 2016.

The device distinguishes itself from other Android devices because the little-used apps and files are automatically moved to the cloud once the device is connected to wifi. Additionally, it has a striking design with mint green or midnight blue details.

The device runs on Android 6. 0 and aboard a Snapdragon 808 processor, 3GB of RAM and 32GB of storage memory, plus an additional 100GB in the cloud. There is also a 5.5 inch screen and a 13 megapixel camera at the rear.

The unit can be shipped to the Netherlands, but getting there still shipping from $ 95 to, plus any import duties.