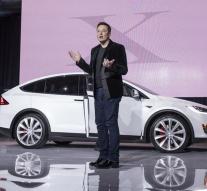 - Elon Musk , CEO of Tesla, does not worry about the arrival of the first self-propelled electric vehicle from Apple . " They hired people we laid off " , he says in the German newspaper Handelsblatt .

Musk revealed that talks with Apple about Tesla Tesla as the graveyard. "If you can not make it to Tesla, go to Apple working", said Musk who made it clear he was not kidding. When asked whether he is serious about Apple's plans, he lashes out at the latest product from Apple. Laughing, he asks whether the journalist who has ever looked at the Apple Watch and then continues.

No, it is good that Apple is investing in this direction and moves, but cars are much more complex compared to phones or smart watches. You can not just go to a supplier like Foxconn and say: Make me a car. But for Apple, the new car is the logical thing to finally offer a significant innovation. A new pen or a larger iPad alone are not relevant enough. Apple has been working for several years on an unmanned vehicle. The company would accelerate efforts to get the car on the road in 2019 and have set a target date.