Home / Tech / More than half of world's population has no Internet 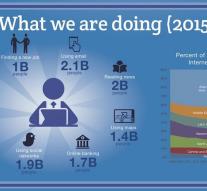 - Next year, approximately 3.2 billion people access to the Internet. That equates to 44 percent of the world population. More than two billion online using mobile devices.


According to new figures from IDC. The research has be charted how the world uses the Internet.
Around 2.1 billion people worldwide use email. Also for reading news (2 billion) and the use of social networks (1.9 billion), we make extensive use of the internet. With 1.7 billion users online banking is also very popular, as is the use of instant messaging (1.5 billion). For finding the way, streaming music and finding a job is the internet widely used.
With 91 percent, the Netherlands has the highest broadband penetration in Western Europe. Moreover, 44 percent of all global Internet users residing in Asia. Is expected to remain provisionally true. Countries like China, India and Indonesia have the highest growth in Internet access. Due to the combination of cheaper and cheaper devices, wireless networks, it is in these countries, increasingly easier to access the Internet. China currently has the most mobile devices in Asia, 981 million.
NEW