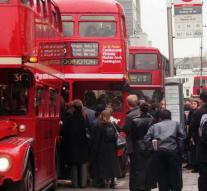 london - One of the main arteries of London , London Bridge , on Wednesday at the end of the day closed because there was a suspicious package found . It was beaten in the rush-hour alarm . British media warned therefore that much delay in traffic occur. Police are investigating at the bridge over the River Thames.

British media mentions large traffic. Police have released the route after researching on the bridge over the River Thames. What was in the package was not disclosed.