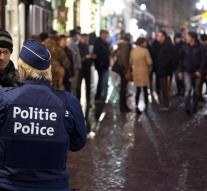 brussels - Concerned people have massively Saturday phoned the hotline, which is open because of the increased threat of terrorism around Brussels. Twenty employees of the Crisis Center of the Interior received four hundred people per hour on the phone, write Belgian media Sunday.

The questions went under the Belgian federal police on various things. " It's very simple questions such as' I live in Brussels and wants to buy milk, I can go to the Delhaize in the neighborhood ? " to business people who ask whether they should seek alternatives for their flight Thursday to the US ", said Peter Dewaele police.

People with questions may also call the special number Sunday. The Crisis Centre has put the most asked questions on the website.