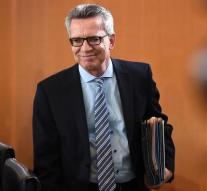 - Germany is willing to pay for the return of rejected asylum seekers to North Africa. Often fail because countries such as Morocco, Tunisia and Algeria refuse to return. Berlin is now trying with these countries to agree on financial help, the Bild newspaper reported Thursday.

German Interior Minister Thomas de Maiziere would end of this month to Tunis, Algiers and Rabat flying to sign an agreement.

Currently, there would be 6,400 Moroccans, Algerians and Tunisians stay in Germany, whose asylum applications have been rejected but who can not return. In December and January, tens of thousands of migrants from those countries to Germany.

Sweden also announced last week wanting to return to almost 80. 000 rejected asylum seekers mainly from North Africa. The Interior Minister Anders Ygeman says now that the country is willing to pay for it.,, I have nothing against, for example, financial help orphanages in Morocco itself to bother returning children, 'he told the newspaper Frankfurter Allgemeine.

It is not yet known how much money the country for the return have.