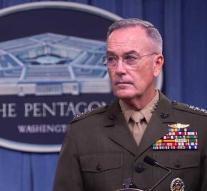 athens - The highest American soldier, General Joseph Dunford, has warned of the consequences of a large-scale invasion of the Syrian Idlib province. 'If major military operations take place, we can expect a humanitarian catastrophe', said the chairman of the chiefs of staffs.

Idlib is the last big stronghold of the insurgents fighting against President Bashar al-Assad, who is supported by Russia and Iran. Dunford said that an estimated 20,000-30,000 militants are in the area. The general also stressed that he had no idea of ​​the scope of the operation planned by Assad and his allies.

Earlier, US President Donald Trump already called for restraint. He said Assad should not launch a 'reckless attack' on the province. 'The Russians and Iranians would make a big humanitarian mistake by participating in this possible human tragedy. Hundreds of thousands of people can be killed, 'he wrote on Twitter.

A spokesman for the Kremlin said that the presence of extremists in Idlib undermines the peace process. The province would now also be a base for attacks on Russian troops in Syria. 'We know that the Syrian armed forces are preparing to solve this problem,' said the spokesman.

The leaders of Russia, Iran and Turkey are discussing the crisis in Syria on Friday. Then the situation in Idlib is high on the agenda according to the Kremlin.