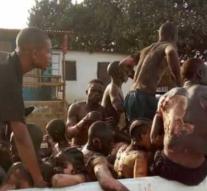 madimba - At least fifty people were killed in the Democratic Republic of Congo on Saturday by a collision of a tanker with a bus. Both vehicles caught fire at the city of Madimba.

At least a hundred people suffered severe burns. 'A convoy is ready. We are going to bury the bodies. We condemn the grieving families, 'Governor Atu Mabwana of the Central Congo province told local media. Madimba is located about 80 kilometers south of the capital Kinshasa.

The roads in Congo are notorious for the bad state they are in, the result of years of war and neglect. In 2010, at least 230 people were killed when a tanker landed on its side and exploded.