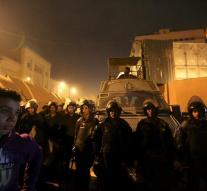 - Hundreds of demonstrators late Thursday took to the streets of Cairo to protest against police brutality in Egypt. Earlier in the evening a police officer shot a man dead in the street.

According to a statement from the security service in Cairo shot the police officer a driver after an altercation death. He was then chased by a group of locals who were trying to kill him. Police found the police eventually.

The incident does public anger about police violence increase. Last week, thousands of doctors to protest against the police. Two doctors were beaten by police officers in a hospital in Cairo.