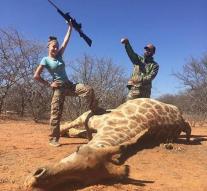 - Photos of a 12-year-old girl who proudly poses with killed animals such as giraffe and zebra call many worldwide disgust. Young Jagertje now even gets death threats inside.

One of the images is the girl with the heart of a giraffe in her hands.

On the Facebook page of Aryanna Gourdin, where the photos were posted, the adverse reactions are pouring in. According to news site SFGate the photos taken during a recent safari trip with her father.


'I do not know whether hunting really makes sense or not, post pictures showing how proud you are of the killing of these animals is disgusting,' is a response that gets a lot of likes. 'It makes me angry and sad that people do such a thing without feeling shame or guilt. '\\

Another writes: 'I am a hunter, but I find disgusting. Why? Being proud of one shot is one thing, but it seems you have a photo shoot and for me not to 'sport'. A giraffe is an animal that you must kill. There is a difference between killing a deer to feed your family and use the skin and antlers, and the killing of a giraffe and then with his heart to be photographed. '


A friend of the family, which keeps track of their Facebook page because father and daughter are abroad again, is just proud of the girl. 'Not many 12 year olds, let alone adult males have experienced so many yachts as this girl. This little girl is the next big thing, 'he wrote on his Facebook page. According to him, five orphanages were fed the meat brought the chase.

About the angry reactions friend writes this: 'All of these death threats to a child because they choose to hunt ear. If you threaten her and her family you must first past her father and me and thousands of others. I promise I will not hesitate. '

According to him, the girl and her father as they are back to give an explanation for their pictures to provide more clarity on the Aryanna hobby.

The case is very similar to that of 'hunter babe' Kendall Jones. The Texan cheerleader repeatedly came into disrepute because they posed with happy shot dead animals.