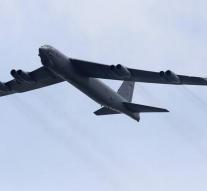 - An American B-52 bomber on Wednesday (local time) crashed over the US air base on Guam.

All seven crew members, survived the crash on the Oceanic island, which is part of the Micronesia region, according to local authorities. The military plane was on a routine training when the accident occurred. Research should determine what exactly happened.

The Boeing B-52 Stratofortress is a heavy American bomber for the long haul, built by Boeing. Although the unit is a relic of the Cold War, the US Air Force is still frequent use of the type.