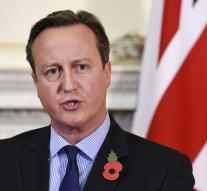 london - British Prime Minister David Cameron is planning in June to hold a referendum on whether the UK should remain a member of the European Union. This was announced Monday The Times newspaper.

The newspaper says that Cameron hopes he achieved on or before the EU summit in December that the other 27 member states agree with most of his reform proposals. For example, he wants more powers back to the national capitals. The reformed EU would sit well with the British electorate.

Tuesday Cameron sends a letter with reform plans to the ' President of Europe ', the president of the European Council, Donald Tusk. Cameron warns according to The Times, the Polish head of the EU that he soon would support the camp of the no-voters if there is no agreement.

Cameron has announced a referendum before the end of 2017. According to pollsters is still a majority of Britons for membership of the union.