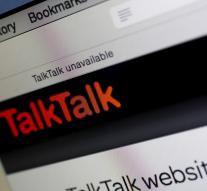 london - The British Parliament is investigating the burglary in the computers of the telecommunications company TalkTalk. The Commission for Culture, Media and Sport said they are concerned about how companies protect online information of their customers.

When the heel by Talk Talk on October 21 the bank details of more than 20 000 customers are captured. Furthermore, the hackers have gained access to nearly 1.2 million e- mail addresses, names and phone numbers of customers. Initially it was feared that data from four million customers had fallen into the hands of criminals. The provider emphasizes that the stolen banking data can not be used for financial transactions.

The British police has now made ​​four arrests. On Tuesday it was announced that a sixteen year old boy from Norwich in eastern England was arrested and put.