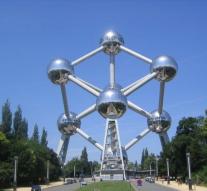 brussels - One of the most prominent and leading tourist attractions of Brussels, the Atomium is open to the public Tuesday. Although the highest level of terror is still in force in Brussels, visitors can take a look at the famous building.

The nearby amusement park Mini- Europe is open, the Atomium late Tuesday know via Twitter. As well as a furniture and interior design fair in the exhibition and events venue Expo, which is also located nearby.

The Atomium, which annually receives about 600,000 visitors since Saturday was closed due to the threat of terrorism.