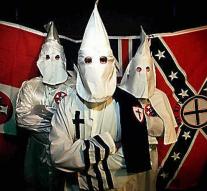 - Anonymous will next month announce the real names of thousand members of the Ku Klux Klan. The hacker group has managed to gain access to Twitter accounts of several members of the white racist movement in the United States, she left Thursday (local time) to know.

" You are the terrorists who hide their identities behind sheets and infiltrate society at every level. (...) You have blood for almost 200 years on your hands. " Therefore, the hacker collective takes to lift the time the online privacy of the Ku Klux Klan are on.

Under the name 'Operation KKK " Anonymous is trying to fight the Klan since last November, members of Anonymous were threatened by the KKK when they demonstrated against the decision not to prosecute the officer who shot and killed a black boy in Ferguson.